Renowned artist and Glasgow School of Art alumni David Sherry raised a number of interesting issues when speaking at the GoMA forum, ‘The Relevance of Museums Within Contemporary Art’. For those unfamiliar with his work, Sherry is an internationally exhibiting artist who has represented Scotland at the Venice Biennale and was shortlisted for the Beck’s Futures prize in 2003. He discussed the problematic nature of collection and display of performance art, such as his piece ‘Just Popped Out’ (see below) which he later performed. 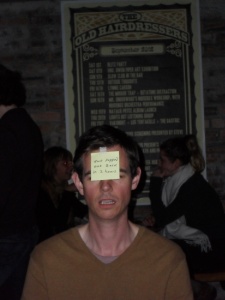 Sherry discussed the extent to which the artist, as being an inherent part of a piece of performance art, becomes part of the collected and displayed work once a gallery has acquired it. He raised the possibility of being replaced by actors, which would seem to be an inevitable situation as the work will outlive the artist. This raises the dilemma of originality, however in the narrowest understanding of the term would the work not cease to be original after its initial performance? Perhaps performance art is destined to be ‘original’ only once. Galleries can, and do, display the props that accompany a performance: Sherry’s post-it note from the performance pictured above is framed on the wall of Gallery Two in GoMA. These props are not the art work, however they lend themselves more to the conventions of archiving and display than a performance does. How institutions deal with contemporary art that is of an impermanent and fleeting nature leads on to GoMA’s photo-sharing project for Social Media Week…

In contrast to performance, it would seem that photographs are permanent works of art. The scenes that they capture, of course, are not. GoMA’s ‘Your Public Art’ project ran for Social Media Week, and invited the public to have their images included in an installation. Inspired by the popularity of Tumblr and Instagram the aim of the project was to examine the idea of what public art really was. Real time photo streams on sites like Instagram’s ‘This Is Now’ project aim to capture the ordinary to the sublime and everything in between: the point is IMMEDIACY. On this feed, for example, photos from the twelve cities that make up the project stream through live, so what can be seen updates in real-time and is therefore constantly changing. The focus seems to be in the inclusion of the remote viewer in the action as it unfolds, albeit virtually. In this case, the impermanence of the medium is the appeal, rather than the creation of an archive of photographs. Of course technically such an archive exists, since nothing which has been put online can ever really be removed. This is incomparable to the way in which photographs as a ‘fine art’ form are used, appreciated, exhibited, or archived, in a gallery or museum situation. In the world of social media, it seems, the photograph is only of interest for a second. Not much longer than the lifespan of the blink of the eye of the photographer who viewed the original scene, the value of the image lies in the substitution of the real life experience of the original viewer which it represents. Yet is this really new? Has photography not always been about the viewer one step removed from the original action…?